Leaving Your Assets to Charity 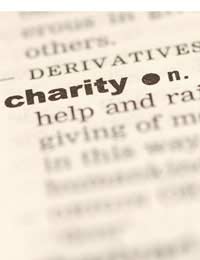 Many people make charitable donations throughout the course of their lives. Indeed the rise of ‘chugging’, with charity employees encouraging people in the street to sign up to direct debits has meant a sharp increase in the number of people donating money to a huge variety of causes.

While the number of regular charitable donations has risen, however, the British public’s past penchant for leaving a proportion of their assets to a charity when they die seems to have been rather forgotten. In the past, it was considerably more common for individuals to ‘remember’ charities in their will; today, it seems that this act has fallen rather out of fashion. Many charities, however, still rely heavily on so-called charitable legacies as a hefty portion of their income. These legacies can often be large but, even if they are not, they often make more of a difference than a gift given during an individual’s lifetime.This is because legacies left to charities are exempt from Inheritance Tax.

Currently (in the 2006-2007 tax year), Inheritance Tax is payable on all estates of a value greater than £285,000, at a rate of 40%. Most charitable donations from an estate, however, are safe from the taxman as they are given special status in law. This extra impact is one of the major reasons that many people choose to make donations in this way; although Gift Aid, the scheme introduced by the Chancellor in 2005 to avoid tax on charitable donations, has been successful, it is by no means embraced across to board.

Furthermore, many people wish to be remembered by the causes they support, and leaving a charitable legacy is an excellent way of achieving this. Finally, leaving assets to charity in your will has a financial incentive: if your estate is worth more then the Inheritance Tax Nil-Rate Band of £285,000, you can use a charitable donation to reduce the size of your estate and thus avoid eligibility for the tax.

If you wish to remember a charity in your will, there are two possible courses of action. Many people simply state in their will that they would like to bequeath a certain portion of their assets to a specific organisation, in the same way that they would leave money to a relative. If you would like to do this, ensure that you include the full name of the charity, its registered charity number, and the exact amount that you would like to leave. As with all aspects of will-writing, it is recommended that you ask a solicitor to perform this task for you.

Another option, however, is to set up a trust. This involves transferring assets to a small group of Trustees, who will assume responsibility for ensuring that your chosen organisation benefits in the way you intend.

Setting up a Trust can be a very attractive option, particularly as you can arrange for it to come into force during your lifetime. In this way you can appoint yourself as a Trustee, and maintain power over your money. Furthermore, a Trust is legally considered as separate from the remainder of your estate; you are essentially reducing your total assets. As a result, you can ensure that this portion of your estate will be safeguarded against both Inheritance Tax and the possibility of being swallowed up by debt repayments. If you are interested in setting up a Trust, you may wish to read the related articles elsewhere on this site.