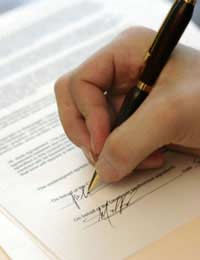 Writing a will is a vital step for those who wish for their affairs to be dealt with in a suitable way after their death. This document, which may not be complex, offers an opportunity to ensure that the wishes of the testator (that is, the individual writing the will) are met. Furthermore, a carefully drafted will, used in conjunction with a trust or similar tool, can be an efficient method of reducing a tax bill.

In order to be effective, however, wills must reflect the current circumstances of the testator and their family. It may be undesirable and difficult to enforce a will that was designed for use in circumstances that no longer apply. Furthermore, there are a number of events which should necessitate at least the revision, if not the rewriting of the document. Amongst these are marriage, divorce and the death of an intended beneficiary.

When revising your will, the action that you take will depend on the nature of the revisions. Sometimes, it is necessary to rewrite the entire document. This should occur when your individual or familial circumstances alter significantly. The most likely reason for rewriting a will is a marriage or civil partnership, or divorce or dissolution of such a partnership. There are a number of reasons why such an event should warrant a full rewrite. In the first instance, it is likely that you would wish for your assets to be passed to your spouse or civil partner upon your death. While this would happen if you were to Die Intestate (although the assets may have to go through probate), this would not be the case if your will stipulated that your estate should be passed elsewhere. Thus, if your will states that your assets should be given to someone other than your spouse or civil partner, and you no longer wish for this to be the case, you must rewrite your will; there is no automatic mechanism for assets to pass to these individuals, other than a basic requirement for fairness.

Marriage and divorce can also have significant tax implications. Assets passed between spouses or civil partners are free from Inheritance Tax (IHT). However, a simple will stating that assets should be passed directly will frequently not make full use of the available exemptions and can end up costing the ultimate beneficiaries significant amounts. Thus, it is often advisable to rewrite your will to include such devices as Nil-Rate Band Discretionary Trusts, explained in more detail elsewhere on this site, to minimise your beneficiaries’ tax bill.

In instances where the changes to your circumstances have not been so drastic, however, a complete rewriting of your will may not be necessary. Rather, it may be more efficient to use a document called a codicil to make a more basic alteration. A codicil is an addition to an existing will, which simultaneously confirms the basic validity of the original will and also makes some alteration. A codicil may be used, for example, to change a number of beneficiaries or to appoint a different executor.

It is important to note that codicils must adhere to the same legal standards as the will to which they refer. For example, if the original document was signed by Two Separate Witnesses then the codicil must follow the same standards. Pre-prepared codicil documents are widely available, and in many cases these will be sufficient. However, it is vitally important that the correct legal formats are followed in order to ensure the validity of the document.

Questionnaire: Should I Alter or Rewrite My Will?

How To Go About Destroying a Will

Divorce and Revoking a Will