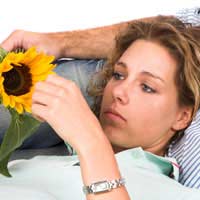 Bereavement and grief are two of the most difficult life experiences that anyone can be expected to go through. The loss of anyone close to you is a difficult even traumatic event, and the effects that it can have on your day-to-day life are significant. However, many people would suggest that there is no more fundamental loss (and, therefore, no more difficult a loss with which to cope) than that of a child.

Any bereavement will almost inevitably result in the preoccupation of the sufferer with thoughts of the deceased. Immediately following a loss, this can often mean that it seems as though normal life has completely ceased; it is impossible to continue in the way in which one did before as thoughts are so completely occupied by the person who has died. This preoccupation can frequently take on the form of regret or guilt, as well as sorrow.

Many people feel that they cannot talk about the loss of their child. This could be for numerous reasons; for many it is too traumatic, and there is a desire to bury the feelings of guilt in order to ensure that life can carry on. For others, it is thought that talking about the loss would cause the listener to feel awkward or uncomfortable. However, another common theme to the experiences of those who have gone through this process is recognition of the fact that it is vitally important to communicate your grief verbally. This helps many people to come to terms with what has happened, particularly as it is all too common to enter a state of denial. Furthermore, although there may be an immediate awkwardness when the subject is broached, the fact that you want to talk about it will become immediately obvious, and put the listener at ease.

In fact, denial is one of the most common and most destructive ways in which bereavement can manifest itself. For many people, there is a desire not to grieve as it is thought that this prevents one from ‘moving on’. However, grieving is a vital part of recovery. It is OK to cry – in the period immediately following bereavement (and afterwards, if it helps) try to set aside some time each day to cry. This can help to compartmentalise your grief, and separate it from your ‘normal’ life.

Should I Seek Counselling?