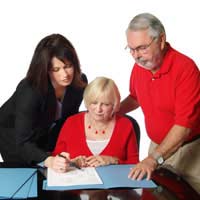 For many people, it seems that life is spent planning things. Whether or not they work out, inordinate amounts of time are spent working out what you are going to do next, or in the future. Contemplating planning a funeral, however, whether it is your own or someone else's, is often seen as a less than enticing, perhaps even macabre, prospect.

In reality, of course, death is an everyday occurrence. Many people would like to know that their remains have been dealt with in the way in which they would have hoped. You can ensure this by putting some time into planning the funeral which you would like to see for yourself.

Before you begin, it is worth remembering a few key points. In the first instance, you should note that you don't have to have a funeral at all; there is no legal requirement that you should have any ceremony conducted on your behalf. Similarly, there is nothing written in law that stipulates any of the details of a ceremony, should you choose to have one. As long as it doesn't break other laws, the organisation of your funeral ceremony is left entirely up to you, or to your relatives.

There has been a great shift away from the dominance of religious funerals in recent years. You do not have to employ any religious representative to oversee a funeral; rather, you could have an entirely secular service of thanksgiving. This could be presided over by a close friend or family member. Furthermore, a funeral need not be conducted in a building which is registered in any way; you could quite acceptably conduct the service in your own house. In these cases, it is worth noting that you do not need to be buried in a church or cemetery; rather, you could perfectly acceptably be laid to rest on private land. This could be your garden, or any other place which has special significance (although you should ask the owner first!).

Ensuring that the funeral is recognisably for the individual concerned, rather than a generic service, is a priority for many people. There are several ways in which you can 'personalise' the funeral, each of which may be fitting in different circumstances. The choice of music is a particularly popular method; having already looked at the lack of necessity to have a church funeral, you might also bear in mind the growing popularity of live music at services.

Finally, one of the most fundamental parts of any funeral service is the readings. Generally, these are given by close friends or relatives, and by the clergyman. Giving a reading at a funeral is a highly emotional moment for the reader. As such, you might want to give consideration to whether you wish to stipulate the readings, or whether you would prefer to leave the choice up to the individual. This might well give them a unique chance to say goodbye in their own, personal way.