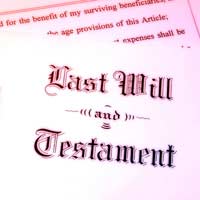 When an individual dies, the disbursement of their estate and the execution of their remaining affairs (such as funeral arrangements and guardianship of children) are carried out in the fashion outlined by their Will. This avoids conflict, and ensures that the deceased individual has the peace of mind that their affairs will be dealt with in the way that they intended.

However, a surprisingly large number of people do not leave a Will, either because they die unexpectedly or because they just don't get round to writing one. Furthermore, if the individual has not left sufficient information as to the whereabouts of the document, it is not uncommon for a Will to never be found, even if there was one. In these cases, estates are dealt with according to laws of intestacy.

In the first instance, liabilities such as outstanding debts and taxes must be accounted for before any other assets can be disbursed. After this, however, a surviving spouse has what is known as 'prior rights'. If they were living with the deceased individual at the time of their death, the surviving spouse is entitled to the house in which they were dwelling. Furthermore, they have a legal right to furniture and other contents deemed to be 'furnishings', up to the value of £22,000. There are certain circumstances in which these rules differ slightly; for example, if the house is part of commercial premises such as a shop, then the prior rights are not to the house itself but to its value up to a total of £130,000. This is also the case if the value of the property exceeds £130,000. In either of these cases, the surviving spouse is entitled to the first £35,000 of the estate or, if the deceased left no children, to the first £58,000.

Preparing Your Will in Scotland
Share Your Story, Join the Discussion or Seek Advice..
In a simple will, no property on a little savings, is it necessary to have a whole section on trusts as in STEP?Everything going to surviving spouse.At death of last one, small cash legacy to six grandchildren (all over 16 bar one who is 15 no wish to provide a trust) residue to only child.
scot20 - 20-Apr-20 @ 3:23 PM
Dad bought small council house with my mum on my advice when he was made redundant. Mum died suddenly and dad courted and wanted to marry a lady thirty three years his junior, both had alcohol indulgences, I was ill with cancer surgery looming when other siblings had fallouts and opinions as to dads decision. Dad visited me and told me he loved her and I toldhim to do what he wanted as mum was gone and anyway he brought up six children and we married our choice. Dad and Barbara married and because Barbara adamantly refused anything to do with beingleft anything from his previous life before meeting and marrying her and threatened to leave him if he left anything to her as she wouldn't ever let anyone caste it up by saying that she married him for his money, I tried to get him to ignore her and asked him to PLEASE make a will as it would cause terrible fights when he died otherwise, My health has not been great but my dad wanted me as joint executor with the eldest sibling and also because my brother was his only male child he felt it had to be that way but because my brother had a poor track record with money and relationships and always borrowing from him, my dad wanted me to be equal executor as he knew I was a practicing Christian and the only one of his children who had never borrowed from him. our family are ordinary people who each have different feelings about Mum and Dad and some very strongly against Dads new wife as she had a history of broken relationships and reputation. My dad loved her and apparently knew of her past and only cared about their relationship now.. And as far as I'm concerned that's okay, This has not made me popular with siblings however and although my step mum ( weird as she is so much younger than me...but it makes me smile ... Good on you dad) will never be on my best friend list, I have no reason or right to choose my dads partners. anyway dad died leaving a will that divides all his money in a few accounts and after funeral expenses was only about ten thousand pounds, my brother ( the other executor went to the bank with the will and put everything into an account in his own name and told me the royal bank of Scotland said that was what to do and that executors accounts would not be worth the trouble for so little money, surely that can't be done? my name and address etc is on the will and anyway if my brother now dies we can't get dads money divided as he wanted. also dads will said his wife could stay in the house for her life if she wanted but as she has no income and is an alcoholic is unable to keep the house in a state of repair and now she is all over the place emotionally and completely out of control... My dad was the stable one and she the emotional roller coaster... More kind than sensible... Dads money disappeared quickly after they married as she was able to make the house nice and have holidays etc that she was unable to do before meeting him and now she is a mess and it's my heart to hel
Girlwithasorehead - 1-Jun-15 @ 10:19 PM
Title:
(never shown)
Firstname:
(never shown)
Surname:
(never shown)
Email:
(never shown)
Nickname:
(shown)
Comment:
Validate: